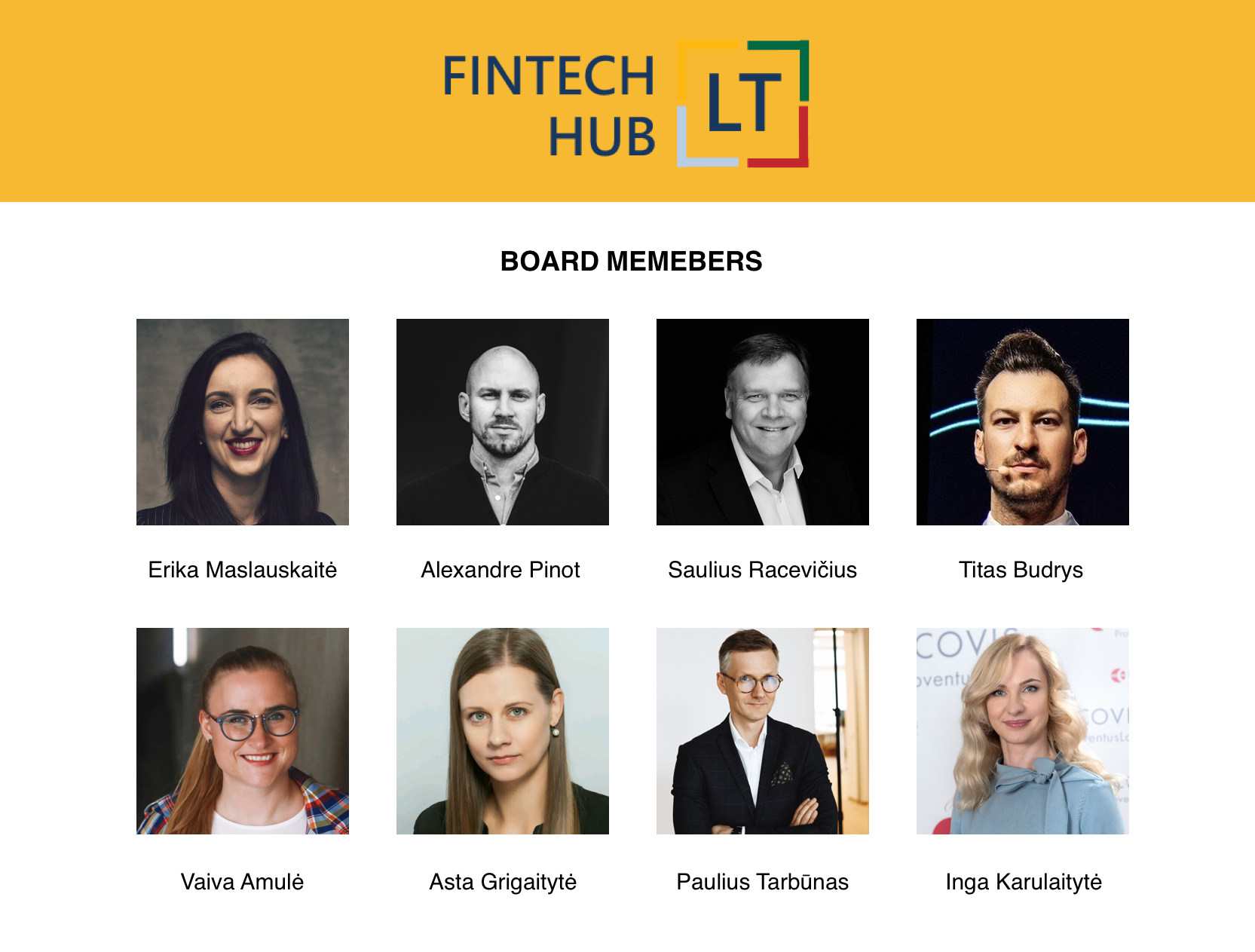 Fintech HUB LT, an association of licensed Fintech companies in Lithuania, has elected a new board of directors. The board is made up of 8 persons, who plan to elect a board chairperson shortly.

The new board of Fintech HUB LT includes a member of the board of Seven Seas Finance Titas Budrys, fintech expert Asta Grigaitytė, ECOVIS ProventusLaw partner and lawyer Inga Karulaitytė-Kvainauskienė, Founder and CEO Alexandre Pinot, Founder and CEO of Fronteria Financial Advisory Services Saulius Racevičius, CEO of NEO Finance Paulius Tarbūnas and Nikulipe Chief Commercial Officer Erika Maslauskaitė are. The eighth and final member of the board will be elected by a separate ballot, as two candidates received the same number of votes in the election.

The Fintech Hub LT Association currently has more than 60 members of the Fintech industry in Lithuania, including companies such as Curve, Vinted, Paysera, NIUM, ConnectPay and others. Since the beginning of 2021, the Association has added to its count 20 new members. In the 2021 Fintech Awards, powered by UK’s Wealth & Finance magazine, Fintech Hub LT was recognised as the most progressive Fintech association in the Baltic States.

“I am very glad that our association is growing rapidly every year and bringing more and more fintech experts together in one community. Only by being together, sharing our good experience and ideas, we can significantly contribute to the development of the Lithuanian fintech sector, to making it known in the world and to attracting new investments,” says Vaiva Amulė, Head of Fintech Hub LT.

Erika Maslauskaite shared her excitement about the new board of directors role, by saying “​​It is a great privilege to work with some of the brightest minds of the Lithuanian Fintech scene, which I aim to help grow by motivating and encouraging aspiring tech entrepreneurs. Excited to see how we can continue to make Lithuania known as the leading Fintech hub of the world!”

Fintech Hub LT was recognised as the most progressive fintech association in the Baltic States in the 2021 Fintech Awards, published by the UK’s Wealth & Finance magazine.

In 2021, the revenues of Fintech HUB LT’s members more than doubled compared to 2020, reaching over EUR 167 million. The sum of payment transactions also doubled to EUR 46 billion.

According to the Bank of Lithuania, the income from licensed activities of EMIs and PIs grew 3.5 times in 2021 (unaudited data) to €504 million at the end of the year: 92% of this income was generated by EMIs and 8% by PIs. In addition, at the end of last year, the number of payment transactions of EMIs and PIs stood at €194.57 billion, up 3.8 times compared to the end of 2020.